You are here: Home » Company » About us 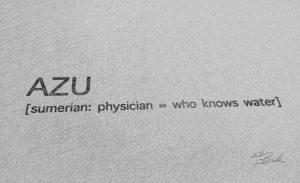 Starting from the past water research has suggested and directed the actions and choices of the people, from the fertile crescent we moved to this day, to united Europe. The glaciers, lakes and rivers have no borders, the protection of their health should be pursued by the Physician, by the AZU, by the one who knows water.
So now that as the Sumerians a time, the conservation of our water is still of prime importance and its realization happens through projects shared by anyone that benefit from it: the human race. AZU Water was born the drainage basin of the Danube, one of the largest in Europe. It includes 18 countries, 11 of which are part of the European Community. Only an extra-territorial vision and a continuous dialogue on methodologies to be pursued will ensure the Danube to return the “Beautiful Blue Danube”, An der schönen blauen Donau by Johann Strauss jr. AZU Water develops starting from the continuous and meticulous comparison of existing realities and their developments. AZU Water believes that there are not many solutions, but only one, the only solution most effective and efficient for every situation at that time. The continuous evolution of applied purification technology requires continuous adaptation to new proposals and solutions. Thanks to its central location, AZU Water has the ability to deal permanently with all the realities, both European and non-European, evaluate their characteristics from time to time by adopting the most effective and efficient solution.