At present, about 1 billion cubic metres of treated urban wastewater is reused annually, which accounts for approximately 2.4% of the treated urban wastewater effluents and less than 0.5% of annual EU freshwater withdrawals. But the EU potential is much higher, estimated in the order of 6 billion cubic metres – six times the current volume. Both southern Member States such as Spain, Italy, Greece, Malta and Cyprus and northern Member States like Belgium, Germany and the UK already have in place numerous initiatives regarding water reuse for irrigation, industrial uses and aquifer recharge. Cyprus and Malta already reuse more than 90% and 60% of their wastewater respectively, while Greece, Italy and Spain reuse between 5 and 12% of their effluents, clearly indicating a huge potential for further uptake.

A recent French study pointed out that countries which recycle the largest volumes of treated wastewater are also those which have the lowest number of mandatory quality criteria and the easiest parameters to monitor (French Environment Ministry, 2014). The study takes Israël and Italy as two extreme examples: Israël is recognised as a leader in water reuse and has defined less than a dozen of parameters, while Italy has defined more than 50 parameters but only recycles a small proportion of its wastewater. 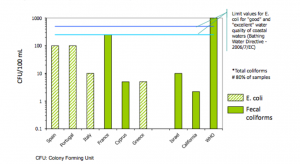